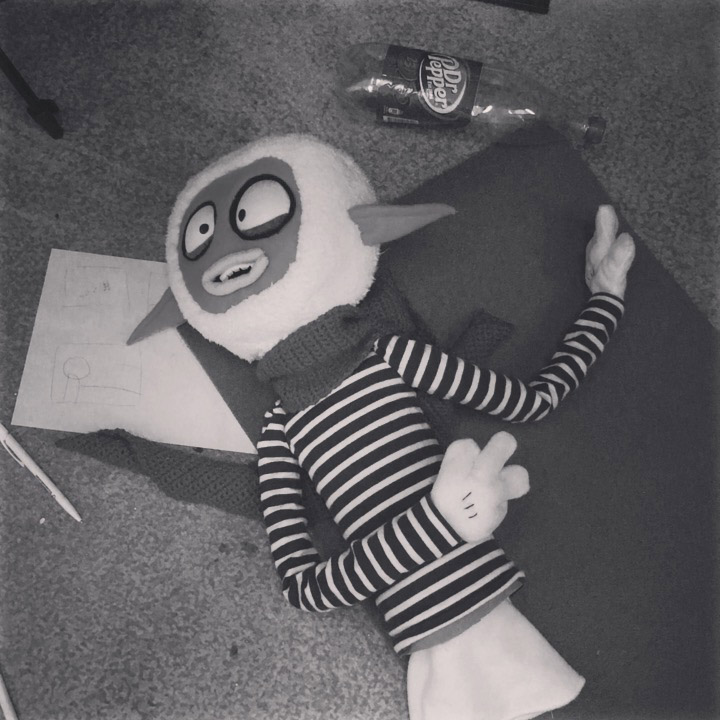 Before any new updates on Who can love Pikku Iso? I am going to show a little bit of the work I did for the Arctic Light Film this year.

I started by creating a small animation based on last years character. Pretty soon I discovered that I really couldn’t get the results I was aiming for in the short amount of time I had to work on the animation. When I also was told that the poster I made based on that animation wouldn’t print well I went back to the drawing board.

Instead, I collected all leftover foam I could find in the studio and sculpted a face for a hand puppet. The face of the puppet I made from my son, Finn’s, old mattress which was much too thin to work as a face. But since there so few shots in the film I decided to make it work anyway.

I covered the foam in cloth cut from blankets that I bought at Rusta.

The eyes were made from hobby foam that I heated with a heat gun and formed over a ball.For the body, I used an old camping mat and the same shirt I used last year.Yuki crocheted a scarf just in time for the shoot despite having a fever and a terrible headache.

First I did the photography for the poster and then I continued with the shots for the film which I probably redid close to twenty times before I figured out the way the puppet should move.

The backgrounds are mostly reused sets from the Pikku Iso-film. The starry sky I had already created for the first animated attempt, and I could just lift it into this puppet film.

Finally, I animated some effects, like breath, particles, and flares using Light Wave 3D and After Effects.

Martin then made the sound and music for the film.